Chris Burke and I have completed a rotation up to our camp 3 at 6900m. The whole trip took 6 days because of a few nights pinned down at camp 2 by high winds and heavy snow. It is a bit of a gamble staying up that high for so long because the human body and immune system weaken pretty rapidly in the low oxygen environment but we felt strong and pushed through and now feel much more acclimatized. We also managed to cache most of our heavy gear and supplies at camp 3 in the processes so our summit push should start a bit easier. The route to camp 3 included a couple of exciting 1m+ crevasse jumps along the winding maze between even larger crevasses and one solid ice wall. We're not sure when our summit window will be as the current forecasts call for quite a bit of snow but we've heard that our neighbors to the west on Lotse and Everest are expecting a May 16th weather window. Kanchenjunga summits tend to be a few days behind Everest as the jetstream moves north. I'll report in as we learn more. The deli-copter made it in today in a small gap in the snow storm to pick up an injured Italian expedition cameraman and brought in supplies including fresh veg and toys! My lovely colleauges managed to deliver a pocket sized drone that is packed with acoustic and stereoscopic vision sensors and really cool computer vision systems to allow for amazingly stable, autonomous flight. Thanks to everyone who's contributed to OpenCV ARM, NEON and Mali optimizations. Aside from just being an amazing camera platform to shoot the beautiful rugged terrain with, it is also small and light enough to carry in a backpack and orders of magnitude less expensive than using a manned helicopter or tasking a satellite for updated images of the route. Those that remember our expedition on Annapurna last year might recall that we have a difficult time finding a route through the winding seracs, crevasses and towering ice blocks between camp 2 and 3. It took several dead-end attempts in the falls to find safe passage. We even hiked up the mountain across from Annapurna with a telescope to see if we could spot a clean route from a distance. Our camp 3 is situated under a similar ice block (see photos below) and the trip up to camp 4 looks like it will involve descending in to a giant crevasse and climbing up the other side (Ascent of Rumdoodle style). I'm hoping to pre-scout some better lines in real time from relative safety behind my smart phone screen. This type of technology is already being used to inspect infrastructure from bridges to power lines to buildings, even deliver packages. I expect we'll see much more of this autonomous, inexpensive ARM powered technology doing everything from improving safety in dangerous environments to making and sharing art.Tonight is the full moon which means today is Buddha's birthday. We woke to several camps playing chants and all of the Sherpa are in high spirits today, playing card games, burning juniper and playing on the giant boulders around camp. It is a fun atmosphere with fresh snow on the ground and dozens of prayer flags criss-crossing our camp, floating on the wind. I celebrated by taking my first 'shower' in two weeks and doing laundry while it was snowing. Ahhh, the glamorous life of base camp. Lakpa building furniture and melting snow at our C1 just before the "down jacket" (first sunlight) hit our tents. 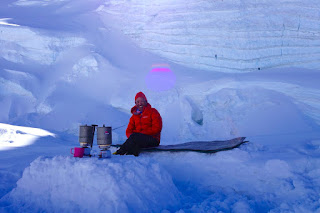 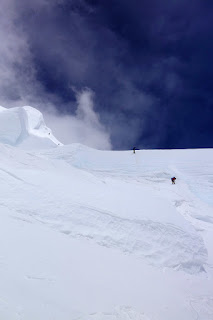 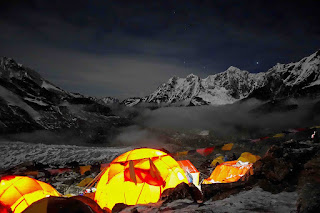 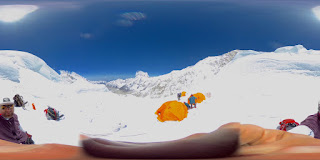 You can follow our progress and send me short messages via my sat beacon:https://share.garmin.com/MatthewDuPuy@why_mutate_dup on Twitter and FBThanks to @ARMCommunity for the support and technology that drives my training, safety, communications and photography; all with a couple of tiny solar panels. I can't wait to get to an unmetered internet connection to share video and full res photos!Thanks Altitude-Seven.com for weather forecasting support and adventure inspiration. Thank you all, friends and family, for the kind electronic epistles of support, bits of news from the real world and overwhelming kindness. They are much needed, appreciated and entirely undeserved.
Posted by Unknown at 9:59 PM