I walked down from Camp1 and on to a helicopter to Pokhara two days ago. On May 1st, 2016, we stood on the summit of one of the most challenging (statistically deadliest) peaks in the world, Annapurna I (8091m). An accomplishment about 200 people can claim and, I think, fewer than 8 Americans can. As with K2, it hasn’t sunken in. I’m not sure that it will any time soon. I appreciate the outpouring of love and support from friends, colleagues and family. I’m not sure it is deserved since we voluntarily subject ourselves to this struggle and the rewards of perspective from traveling to this place, this culture, this physical challenge are wholly gratifying. It is lovely to hear from you all though; the climbers I look up to, my family and friends that lit this passion, my coworkers that are covering my butt while I’m out and designing the gadgets that make this journey both safe and share-able. I stand on the shoulders of your support.

On this summit push, we expected the winds and snow to be low on May 1st so we left base camp on April 27th and took a day to get to each camp on the way up. The first two camps, as you know, are pretty easy to get to and relatively safe though lots of folks had to excavate tents from over a meter of snow at C2. The journey to C3 was, again, full of blue, nearly vertical ice and quite strenuous. The serac above the gully was relatively quiet though we hear it nearly got two Russians on their way out. What I wasn’t aware of was how, equally, tough the trip up to C4 would be on April 30th. Some teams used a lower camp 4 that still had some overhanging ice climbing to get to but in order to shorten our summit day, we opted to use an upper camp 4 around 7200m. After about 6 hours of climbing above C3, I strolled in to our C4 fresh and ready to tackle the mountain. And by strolled, I mean, hobbled, gasping and wheezing about 4-5 breaths for every step I took until I finally got to our tent site. We spent about 8 hours there warming up, making water and resting. I think I drifted off for about an hour before we woke up at 9pm for a 10pm push.

Once fully suited, harnessed, and packed, we stepped out in to the frigid night air. In the 5 minutes I spent standing outside the tent with the conductive steel spikes of my crampons stuck in to the snow, I could start to feel my toes numb, even with chemical toe warmers clumsily stuck to my socks. When Pema motioned for us to take off as a pair, we rocketed up towards the headlamps bobbing slowly up the hill ahead of us and I started to feel my extremities again. The Spanish had left lower C4 at around 7pm and had made it just past our camp. We caught them in just over an hour. It is a strange feeling climbing at night; living in a small sphere of light cast by our tiny, brilliant, white LEDs on our foreheads. Before moonrise, the only reference of movement and progress is the twinkling headlamps above and below you and the dim, static stars above. They are comforting though. As long as there are stars, there aren’t clouds and high winds pushing snow around the mountain or in to you. You feel this delicate sense of comfort in the quiet, soft warmth of your down suite as you feel the biting cold of the outside air on your face and the long trail of steam as you exhale in to the impossibly cold, thin air. I peel back the gauntlet on my mittens every 20 minutes or so to gaze at the tiny route line on my GPS watch. The dim backlight seems blinding in the dark night. Part of modern 8000m peak ascent is this night start but without moonlight, people are left to follow contours on the mountain that they know by daylight. This has led expeditions to loose their way at night only to have to make up lost ground or retreat when the sun reveals their location. As I wrote before, Lakpa and I sat down with mapping software and drew and approximate route I could view from my Ambit 3 without carrying a clumsy handheld device and exposing skin. It worked brilliantly. When the sun started to peek up from the horizon around 5am, we were just a few hundred meters short of the couloir we needed to ascend to the peak. (360° photo attached, around 7700m) You can see ice frozen on my eyelashes in this photo. We were also out of fixed line at this point. Fortunately, Pema was carrying a thin lead line. He pulled it out and without a word spoken, I figure-8-ed in and we were off. Untethered from the long, poly-pro, umbilical back to C4. And again, I enlisted my watch to drop a breadcrumb trail should we find ourselves back at this point in white out conditions in need of navigational queues. Digital bread crumbs are marginally lighter than a satchel of bamboo wands.

We traveled up the couloir as it appears on satellite images and as planned but at what seemed like the top, appearances were deceiving, the summit was still a long way off, up and to the left. The actual summit might have been more difficult to find had we not had two sherpa with us who had been there (Pema, twice) and my GPS fix to follow. It was around there I think I could tell something was happening to one of my lungs. This is typical though. Small colds turn in to respiratory infections up here often but it was slowing me down. The Spanish and Korean teams passed us by after Pema’s heroic, alpine style trail breaking ahead of me and soon we saw the Nepali flag one of their Sherpa had planted on the summit! After what seems like an eternity (an hour), we waited our turn in line and joined Lakpa and Chris on the tiny, tiny summit in gail force winds for quick pictures and an even faster retreat. In the attached/linked 360° photo, you can see the spindrift howling off the summit point. I gazed down the east ridge towards Rock Noir and west towards Dhaulagiri for a few seconds and we were off; down climbing the same route we came up. Axe and front points in to the snow and head bobbing up and down to peer between our legs below and the person above us. The whole ordeal to the summit taking 12 hours, 30 minutes from tent to summit. The return trip was fairly arduous but uneventful. My lung continued to slow me down until it was wheezing but never stopped working. I was quite proud that we’d climbed without fixed ropes above 7700m to the top. I was really glad I could send a short message from my smartphone and satellite beacon to my friends and family notifying them when we were safely back in our tent at C4. There were a couple of cases of frostbite and a heli rescue at C1 but in all 26 people topped out and made it back to base camp over the next couple of days.

You can see our heli ride out was an adventure in itself. Our pilot did a power/weight check takeoff first, then circled around back to base camp and flew at a ridge blocking our escape at full speed and cleared us by a few meters before dropping in to the exit valley. The astute may also notice his navigation aid is also an ARM powered device. When he realized we had the 77 year old Carlos Sr. on board, he took a selfie of himself with Carlos all while flying.

I have processed some of the 360° video I have in to interactive mode but uploading it over the limited bandwidth to the Facebook interactive viewer from Pokhara isn’t going well. What I can do this time is link to still photos in the Google Photo’s interactive viewer so you can pan around the stills like you would view them in a VR viewer. If anyone else wants to grab the videos and put them an interactive viewer, you have my permission to do so. The Ricoh Theta software also works on your local computer.

Tomorrow, we make a 5 hour drive with a full, new expedition’s worth of supplies and start to find our way to Dhaulagiri base camp. This should take us much less time to climb as we are fully acclimatized but again, we’ll wait on weather. Thank you all! 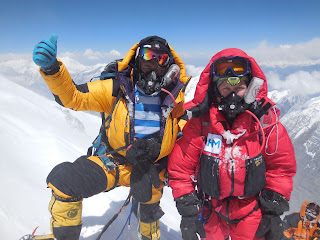 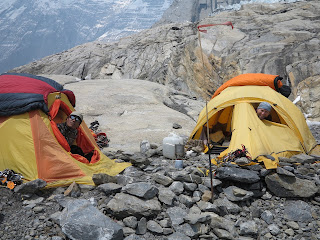 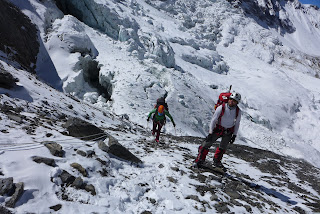 Headed up to C1