Annapurna I, first rotation to camp 2 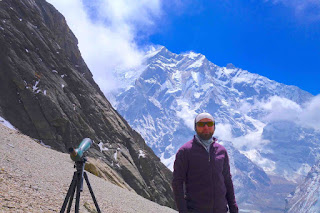 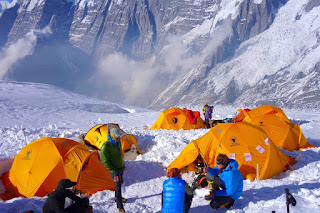 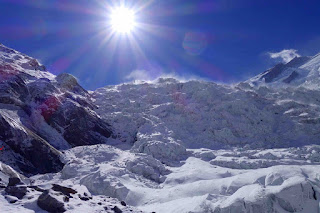 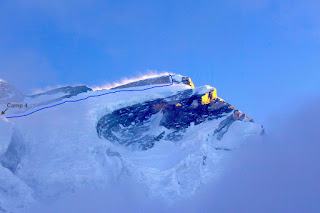 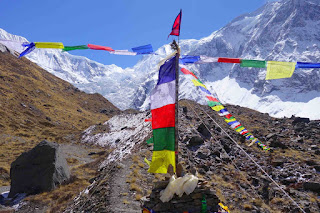 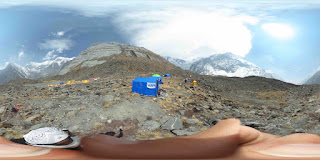 <draft: edit notes, I don't usually include the acclimatization, supply run and atmospheric info but since we have a broad audience, I've included it for context of rotations. Feel free to cut as much as you like. Also, using a different email client since Apple Mail attached in its own format. Picture captions are in alpha order of attached file names>

We've just returned from a rotation to camp 2 on Annapurna's north face. For those not familiar with high altitude mountaineering; a series of camps are established on the mountain not just to cache fuel, food and safety gear for a multi-day summit push from base camp but also to acclimatize. As we increase altitude, the air becomes thinner. As little as half to one third of the air we get at sea level. Our bodies adapt by producing more red blood cells to absorb the limited O2 in our lungs so before one summits an 8000m peak, they must stress their bodies on several  climbing rotations. We climb parts of the mountain two or three times. Many of us check our O2 saturation with a pulse oximeter and register as low as 70%. This is normal but at sea level, you'd likely be hospitalized with O2 sats under 95%. On Everest and K2 we climbed as high as camp 3 on our first rotations before making a week long summit push. This also means that if we're successful on Annapurna, climbing Dhaulagiri may go much faster.

This particular trip, we spent two nights at camp 1 (approx 5000m) then moved up to camp 2 for 3 nights (5625m). Climbing the ice falls up to camp 1 took us about 8 hours this time. I expect we'll cut that time in half on our second trip thanks to the extra red blood cells. The ice falls on our route were a tricky mix of ice, snow and rock climbing, all of which changed considerably between our going up and coming down. A lot of it melted. Seracs collapsed, avalanches swept some of our fixed lines. We only intended to spend two nights at camp 2 but thanks to our trusty sat phone, we were able to get weather updates from a meteorologist back in Kathmandu and compare them with a swiss climber's (Guntis from Zermatt!) reports. A 3 day snow storm was predicted starting the evening of the 26th and worsening on the 27th. Better to stay high till the last minute and fix lines to our potential high camp 3 and descend as the clouds start to roll in. Camp 3 on this French/Polish modified route has sometimes been put in a very dangerous place up a steep wall of ice with hanging glaciers nearby. "Lower camp 3" was swept clean of its tents and supplies last year by an avalanche. Fortunately, no one was in camp when that happened. We're planning to make an upper camp 3, a half hour higher and above a towering block of ice that looks like it wants to succumb to gravity and heat pretty soon. This is the technical crux of the climb and can take about 9 hours to navigate. It is steep, blue ice, seracs, all near a beautiful, imposing hanging glacier that rains ice blocks in to a nearby chute every few hours. We don't dare cross this chute. Expeditions as recently as 2010 have lost climbers there in the wrong place at the wrong time. Lakpa, our expedition leader, is one of the most gifted ice climbers I've had the pleasure of watching climb. I recently learned that he was the first person to climb the 800m ice fall across the valley from Namche. Anyone that has trekked in the Everest area might recall what an imposing ribbon of ice that is. On the 24th, he and our "young Lakpa" hauled several hundred meters of rope to the base of the route and managed to fix half of a new route far to the right of routes in the past. It is steep, vertical at some points, but more direct. Chris and I hiked a few hundred meters above camp 2 to get a good vantage of their marvelous route finding and climbing skills. Check out her March, 26 blog for a shot of Lakpa on the blue ice. The next day, Norbu, another legendary Sherpa set the upper half of the route on a more historical line to lower camp 3. As difficult as it was getting to camp 2, watching them navigate this strange wall of moving ice makes me feel like a mountain tourist. The tongue-in-cheek difference between climbing and hiking is if you pull out a rope or an ice axe, you're climbing. I have two ice tools I use. I hope that counts.

On our third night at camp 2, we grew from a meager 5 tents to 12 as the Korean team arrived along with a Chinese woman (Lowa Jin, we climbed K2 with), a Bulgarian, an Israeli, a Turkish climber (Tunç, an impressively strong climber whom I walked out on Baltoro glacier in Pakistan two years ago), a young German (Jost), a swiss climber (Guntis) and a Hungarian. Add Chris, an Aussie/Kiwi, some Sherpa and me, we're truly, an international crowd. Two Italians and Russians arrived by heli yesterday too. It is so much fun to put aside politics and other divisive topics and chat about adventures, motivations and loved ones as we build snow couches, toilets, steps and other futile sculptures that will be buried in the impending storm, like sandcastles ahead of a rising tide.

With the thin air at this altitude, UV radiation is a bit more intense not just because there is less atmosphere to filter it but also because in some places, the light is reflected by the white snow on either side of a valley, an ascending glacier and the ground beneath us. I recall days at camp 1 on Everest where the temps could swing from the 90°s F (40°s C) to below freezing in a matter of minutes when the sun set. The health conscious among us tend to cover almost every square inch of skin with clothing. This can cause discomfort and danger at high temps. If you sweat, then stop climbing or have the clouds move in, you can become hypothermic quickly. We try to walk the line between being cold while stationary and just warm enough while moving. Fortunately, on our way up to camp 2, we had high winds cooling us and occasionally sending us cowering behind our packs because of blasting ice crystals. On our descent, the impending snow storm gave us some cloud cover as we crossed the worst parts of the glacier. The previous sunny days had melted out the route so much that new ice creeks had formed and lots of exposed rock had me wishing I had slender rock climbing shoes rather than my enormous, insulated, 8000m boots. It was fun mixing terrain though. Every facet of my climbing experience became useful from the big granite walls of Yosemite and Joshua Tree, to the ice falls of Colorado to the glacier travel and mountaineering in Alaska. Thanks to all of my friends who have patiently taught, learned or suffered each of these disciplines with me!

That is the factual information of the first rotation. Emotionally, I am overwhelmed by the history of this mountain and the support of my co-workers, friends and family. I finished Ed Vestures, "The Will to Climb" while we were on the very same route he made his third and successful attempt on Annapurna to finish climbing all 14, 8000ers. His knowledge of the history of this mountain, style of climbing it and poetic insight of the greatest climbers in history left me feeling not worthy to be here. I must admit, getting a congratulatory email from him after being the 16th, 17th and 18th Americans to summit K2 was like an amateur painter getting a high five from Van Gough. Climbing this mountain as light, fast and cleanly as he did is an amazing feet. Also, I'm flooded with messages of love and support on my little satellite beacon. The 160 character limit is painful but getting a message from my brother on my nieces 1st birthday or my mom and dad and beautiful friends tucking me in at night makes me misty eyed. Also, my colleagues managed to not just ship a 360° camera to Kathmandu but managed to get it on to a supply heli to base camp yesterday. I'm already running it through its paces for our summit push on Annapurna I and, hopefully Dhaulagiri. Not just "Yay, Toys!" but more fun technology powered by the creative minds of my colleagues. And then there's this; right now, I'm sipping a lovely beer from the Sherpa Brewery while writing this novela after having my first "shower" in 13 days. Truly, this is luxury. Though we seem to have violated the climbing tenant, "Shower once a week, whether you need it or not."

The incoming storm will be followed by another small one. If we get more than a meter of snow, we might be here as long as a week waiting for a good weather window. Another mountaineering quote, "You have to show to know." Some years on 8000m peaks, climbers will arrive at base camp and never get a weather window to climb higher but we're patient and our BC cook, Gomé, makes fantastic chili paneer, chili tofu, the best fries/chips I've ever had, and pancakes. Lakpa is life support for our live yoghurt culture as well. No small feet with the temperature swings. If we must stagnate, we will do it with full stomachs and full hearts.

And again, Chris has posted to her blog. Each piece will focus on a different member of our expedition. Thank you all for your amazing support!

(360° test shot taken from base camp, my phone is aware of geo sphere information encoded in this picture so when I view it with Google Photos, I can pan around with normal)

(Ice falls between Annapurna North Face Base Camp and Camp 1)

(Annapurna I, North Face from Camp 1 at sunset)